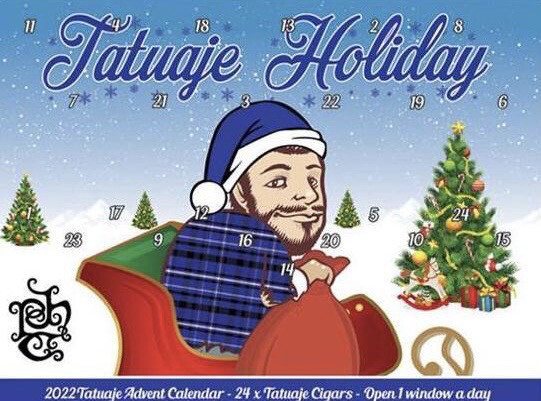 These are pulling into the station on Friday, October 28, 2022. Pre-Order yours NOW to ensure you don’t miss out!

Use discount code BOX for 10% off your order as well!

The Tatuaje 2021 Advent Calendar, which is also referred to as the green version for the color of the stripe along the bottom of the box and the color of the shirt that Pete Johnson wears on the front of the box, was slated to have been released last year, but delays in the production of the packaging forced it to be pushed into 2022. When he announced the delay in October 2022, Johnson said that it would eventually ship alongside the 2022 edition, also known as the blue version.

As for what it is in Tatuaje’s 2021 Advent Calendar, it is a total of 24 cigars, all of which measure 4 1/2 x 46. The core lines of Tatuaje and L’Atelier Imports make up 15 of the 24 cigars, with the following lines included:

When it comes to what’s in the 2022 Advent Calendar, the sizes remain the same but Johnson isn’t disclosing what actual cigars will be included. He told halfwheel that there will only be seven repeat cigars from the 2021 Advent Calendar, and that the five Monster Series cigars, the two holiday cigars, and the two Pumpkins will all be different.

“The Advents are supposed to be a secret of what is behind each door so I prefer not to go into details of the exact cigars in each calendar,” Johnson said when asked what was inside the 2022 version.